Using data from 356,925 broadband speed tests conducted over a year, PCMag recently compiled a list of the fastest ISPs in America. ISPs were then affixed a PCMag Speed Index score based on a combination of line performance, upload, and download speeds.

When all regional ISPs were compared side by side, the fastest ISP in America was independent California ISP Sonic, with a score of 610.6. Sonic has been working with select California communities to leverage their conduit to build new fiber networks.

All told, six of the ten fastest ISPs in the States were either directly run by a local community, or involved some form of partnership between the public and private sectors. 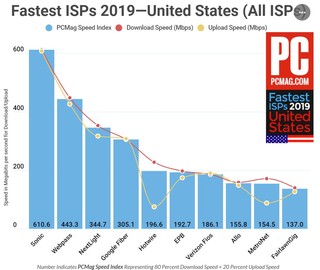 For example, the publicly owned fiber ISP Nextlight in Longmont, Colorado offers symmetrical gigabit connections for $70 per month. Nextlight came in third place among all ISPs nationwide with a Speed Index score of 344.7. The closest major private-sector competitor was eighth-place Verizon FiOS, with a score of 186.1.

Thanks to both corruption and limited competition, US broadband is routinely sluggish, pricey, with comically bad customer service. Frustrated by years of dysfunction, many towns and cities are either building their own broadband networks, developing local cooperatives, or striking partnerships with third party companies to build better networks than are currently available.

An estimated 750 communities (and counting) have explored some variety of public-broadband option, says Christopher Mitchell, director of community broadband networks for the Institute for Local Self-Reliance, a nonprofit advocating for local solutions for sustainable development.

“Local networks are almost always competing against the established incumbents, which means they have multiple incentives to offer better service and lower prices,” Mitchell told Motherboard.
“They are frequently headquartered in or very near the communities they serve, so they spend more time worrying about what their customers think—while the big monopolies are first serving shareholders and less interested in customer experience.”

Eighth place ALLO Communications is a private company that has struck fiber sharing partnerships with cities from Lincoln, Nebraska to Fort Morgan, Colorado in a bid to bring better, faster broadband to the public. Fifth place Hotwire has similarly struck a public a fiber partnership with officials in Salisbury, North Carolina.

Community-run networks may not be the answer for every community, but in areas where they’re deployed, private ISPs like Comcast often are forced to actually compete and upgrade their networks, improving service across the entire region.

“You can rapidly see that nonprofit business models have an important role to play in improving Internet access,” Mitchell said.

Threatened by the specter of actual competition, the telecom lobby has convinced more than two dozen states to pass laws restricting or simply banning communities from building their own broadband networks. These laws also frequently restrict a local town or city’s ability to strike public private partnerships, even if locals have voted for the option.

After all, it’s easier to lobby the government to restrict competition—than it is to actually compete.